Due to the Mennello not being available, the Neighborhood Meeting will be held at Santiago’s Bodega on Virginia. Thanks to Jason the owner for providing this space.

Please note we will be discussing the issue of Haven access to Mills Park.

Also, due to limited space please rsvp to j.gordon.spears@gmail.com

We are concerned about the lack of traffic control coming from the Mills Park development, right on Haven and going through the neighborhood and urge you to consider this.

As expected, the left-in/right-out requirement is Condition No. C2.

There is also a condition that Haven not be used for commercial deliveries (C3).

I’m not sure how this has been addressed, but it does not seem to have been addressed on the two signs on Virginia directing traffic to Mills Park.

Here are a few talking points for anyone who wants to write a letter to City Staff or our elected officials.

* Condition C2 clearly states that the Nebraska & Haven intersection is to provide for right turns into and left turns out of Mills Park onto Haven. Left turns from Haven into Mills Park are prohibited by the conditions of the PD.

* Signage on Haven was not specifically included as a condition of the PD because Haven is a City of Orlando Right-of-way and lies outside of the PD boundary.

* The Mills Park developers have complied with the requirements of C2, but the City has failed to provide the signage along Haven to inform motorist that left turns into Mills Park are prohibited.

* Without a “No Left Turn” sign on haven at the Nebraska intersection the prohibition of left turns into the development is unenforceable.

* Condition C25 does not preclude proactive measures to ensure compliance with the no left turn into Mills Park condition of C2, rather it provides a mechanism for any future additional mitigative measures should the provisions of C2 prove ineffective at minimizing cut-through traffic on South Lake Formosa.

* We are aware of the reasons why City planners prefer not to limit access in the existing street grid, however, the Nebraska/Haven intersection was not part of the existing street grid before construction of Mills Park, but rather was added to the street grid as part of the Mills Park development. As such, it requires special measures (Conditions C2, C3 & C25) to avoid impacting traffic flow in the Lake Formosa neighborhood.

* Our neighbors have carefully weighed the convenience of direct vehicular access to Mills Park and the potential traffic impacts of unfettered access to Haven from Mills Park, and have decided through the resolutions and actions of our Neighborhood Association that the potential harm of cut-through traffic outweighed any potential benefit from unfettered turns at the Haven/Nebraska intersection.

* The Lake Formosa Neighborhood Association has not mentioned the specific conditions of the Mills Park PD to City officials or staff since the original Mills Park PD was approved because we have relied on the City’s enforcement of the PD to insure that all parties would abide by the specific conditions of the PD. We have considered it as settled business, but we have not lost interest or forgotten our concerns regarding avoiding cut-through traffic in the neighborhood.

Please feel free to include these points in any letter to City staff or officials.  I hope that if anyone wants to use these talking points that they will paraphrase them to reflect their own views of this issue.

Here is some correspondence Gordon Spears received from the City. Download and view this pdf that references the changes below: Haven sketch-revised 5-30-13

Just wanted to let you know that the Mills Park developers are working on some revisions to the Haven / Nebraska intersection.  The curb will be extended to clearly prohibit the right turn motion. They are still working with traffic engineering staff to finalize the plan.
Thanks,
Elisabeth Dang, AICP
Chief Planner, Comprehensive Planning Studio
City of Orlando
Economic Development Department, City Planning Division
P.O. Box 4990
400 South Orange Avenue
Orlando, Florida  32802-4990

This Tuesday, 4/16 we’ll have another neighborhood meeting at the Mennello Museum. We’ll be discussing the traffic situtation along Haven Drive in regards to the new development Mills Park. Please join us.

Curious about what’s going on at the corner of Mills and Virginia? Everybody is, right? Here’s your chance to find out and ask questions! 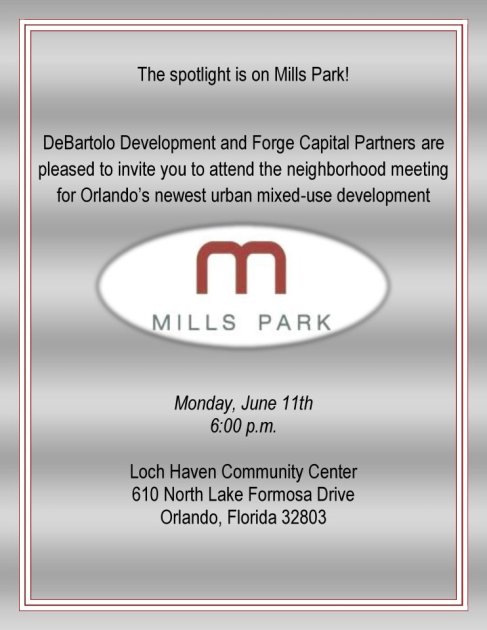